The Kryptonite Kid by Joseph Torchia 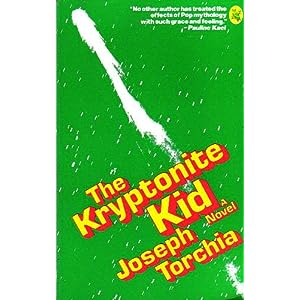 …And that Joseph Torchia’s heartbreaking novel of a boy’s letters to Superman, The Kryptonite Kid, is still out of print…

I first heard of The Kryptonite Kid from Neil Gaiman, in a post on his blog in which he was replying to a review in which Adam Mars-Jones stated, “Superhero fantasy is unsuitable as a serious theme for literary fiction, for much the same reasons that Pot Noodles are out of place at dinner parties.” I love examples of Superman being used as a vehicle for illuminating facets of the human condition, and Neil has nearly always steered me right, so I tracked down a copy.

It is an amazing book.

As Neil says, the book is comprised of a series of letters from young Jerry Chariot to Superman. Jerry (whose name bears a certain anagrammatic resemblance to the author’s, it should be noted, as this factors in somewhat to the ending in a way that simultaneously references Mxyzptlk) does not have a lot of positive role models or authority figures in his life. The nun who teaches his class is cruel. His father is distant and abusive. The top-rated review on Amazon states, in part:

At the last, from the last word of the last sentence in the last paragraph of the last chapter, they would find themselves booted, ejected and expelled, from Joseph’s world as emotionally wrecked, as broken and hopeless, and as forlorn, despairing, and defeated as at the last is his protagonist – a seven year old American schoolboy who believes as did most of us on our ways out of first grade that Superman is real.

It’s true that there is a lot of despair in the book. Jerry spends much of it forlorn. [SPOILERS] And by the end, he is physically wrecked.[/SPOILERS] The reviewer is wrong, though — or, at least, fails to see the light within the darkness that I see.

Jerry Chariot is surrounded by cruelty and abuse. Much of it is coming from those who should most be demonstrating God’s love to him: his father, his mother, and the nun at his school. Both despite and because of this, he manages to find God elsewhere, in the form of Superman. And he maintains this faith, even when everyone tells him that Superman is not real, even when his father shows him the obituary of the actor who played Superman, even though everyone challenges him that he’s never seen Superman or been to Metropolis, even when he can’t find Metropolis on a map, even though Superman never writes back. He believes in Superman with a faith that will not be shaken.

[SPOILERS]That faith persists even when Superman fails to save Jerry. Near the end of the book, in a scene that calls to mind Christ’s temptation in the desert and Satan’s invitation that Christ throw himself from the top of the temple and trust that God’s angels will save him, Jerry leaps from the roof of his house, trusting that Superman will swoop in and save him. Superman, needless to say, does not fly down and save him. Jerry spends the end of the book laid up in the hospital, largely immobilized.[/SPOILERS]

There are continual comparisons made between Superman and God, and Superman and Christ, as Jerry approaches his First Holy Communion. Jerry, in his letters to Superman, comes right up to the edge of articulating the idea that Superman has become his stand-in for God.

[SPOILERS]In one final twist, at the end, the reader discovers that as Jerry fell from the roof, green cape flapping, he felt someone come up behind him through the air. It was not Superman. It was his father who, having arrived on top of the roof too late to grab him before his leap, has jumped after him, defying physics to catch him on the way down and cradle him, shielding Jerry with his own body to take the brunt of the impact upon hitting the ground. Jerry’s father, we learn, who has, up to this point, been every bit the stern, abusive caricature, had sacrificed himself for his son and died from his injuries. In this, even Jerry’s father becomes an example of Christ, sacrificing himself out of love.[/SPOILERS]

Jerry has an unshakable faith in Superman, as he is meant to have faith in God. Jerry loves Superman like he has been taught to love God. Jerry’s father ultimately shows his love for Jerry as Christ showed his love for all mankind, finally embracing the role that God intends for all fathers by manifesting God’s love to his family.

It is a dark book, and a difficult book, but also an amazing book. It is, contrary to the reviewer above, an ultimately hopeful book. And it is one that has continued to haunt me since I first read it.

(In the interest of completeness, I will also note that Jerry’s love of Superman can also be read as an expression of his latent homosexuality, which emerges thinly veiled in the denoument, embodied in a worship of the physical “perfection” of Superman.)

This entry was posted in pop hermeneutics. Bookmark the permalink.

1 Response to The Kryptonite Kid by Joseph Torchia